Christmas is a funny time of year for London’s Jews. For many children who are not in Jewish schools the experience post-Chanukah is of hearing your friends get increasingly excited about Christmas and what Santa will bring. Whether it be snow filled vistas, the sound of Christmas songs (from Phil Spector to Slade to traditional Christmas carols), the Queens Speech or the presents waiting to be opened at the crack of dawn by kids in pyjamas; these remain some of the most endearing images of British society at Christmas. For those children not party to this, for whatever reason, these images can cause envious gazes. Now many Jewish (and other non-Christian) parents feel pressured into creating the full Christmas experience for their children. Santa and his sleigh no longer pass over the muzuzah’ed houses and only drop down the chimneys of the good little Christian boys and girls. And you are as likely to see Rachel or Rupal or Ahmed or Asher sitting on Santa’s knee in his grotto discussing whether they have been good this year! Santa now reassures all children that he will visit them, no matter in what language they pray for their presents!

But as the season is about giving, and with this spare time on our hands, what better time to turn our minds to the needs of others. There is no better time for us Jews to give up our time and resources.

With that in mind, it was with joy that a few mensches gave up their seasonal break (all 4 days and nights of it) to provide warmth and comfort, love and friendship to some in their community who are less fortunate; a homeless shelter with “all the Christmas trimmings” over the festive period in a synagogue! Surely, this is the true meaning of the giving season. And in giving, there is the privilege of feeling appreciation and the glow of gratitude. This is what is missing in the commercial experience in British society’s festive spirit. Giving should not be restricted to Christmas, or restricted to Christians at this time. In North London, the remarkable work of the same synagogue has set a wonderful precedent. This summer, during Ramadan, the synagogue converted nightly into a mosque for prayers and the breaking of the fast and Iftar celebrations. Every night for the duration of Ramadan, over 50 Muslims came to pray and eat. The Imam’s call to prayer, from the Bimah, echoed throughout the halls. Finally, on one special night, 150 locals from Muslim, Jewish, Christian and Sikh communities came together to sing ‘Salaam, Shalom, Peace’. An unforgettable image of people of all faiths and ages peering over the scrolls on the Bimah in wonder will serve many of us well in the darker days of hatred, bigotry and religious restriction that are becoming ever more frequent in today’s world.

Sadly, some of those darker days have been described by the inspiring Canon Andrew White. He told of a far more sinister tale of the ability and freedom to rejoice. In Nineveh, in this past week, the celebration of birth of Jesus has been an altogether different affair. This vast plain, once the hub of Christianity for Iraq and across Persia, and where Jesus’s mother tongue (Aramaic) is still the language of choice for prayer; the voices have fallen silent and been replaced by the sound of gunfire. Fear has replaced joy. Tragically, for the first time in 2 millennia, the prayers of Christians will be a covert occasion risking lives rather than the overt celebrations venerating life. 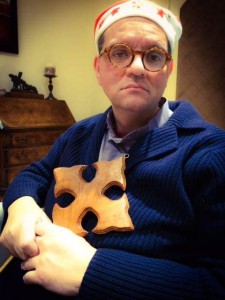 Andrew is also a great mensch in case you didn’t know. And I’m sure that even at such a busy time for most Christians (especially the clergy) Andrew will still have taken time out to tilt his hat to Chanukah. Somewhere in Israel, Andrew will have been lighting the menorah with as much gusto as any of his more customary duties.

The Prime Minister, David Cameron, did his very best to show that he is a mensch too. My wife and I listened to his Chanukah speech, made whilst lighting the menorah candles at No 10. He remarked that there are 26 different ways to spell Chanukah, but there is only one meaning: Dedication. He then made 3 wonderful dedications. These assured and unequivocal dedications he gave to Jews across the globe:

Firstly: to Jewish community in its role in the UK. He went on record to recognise the vast contribution that UK Jewry makes to the wider community plus their extraordinary contribution to the country as a whole.

Secondly: to the State and people of Israel. Britain remains a good and candid friend to our state and people. He has pledged that as long as he is Prime Minister this will remain so.

Thirdly: to the memory of the Holocaust. Soon there will be survivors of the Holocaust left, so David Cameron (inspired in part by his visit to Auschwitz), dedicated part of his legacy to ensuring that the messages and lessons are never forgotten.

Whilst other leaders in the UK made positive noises at this time too, David Cameron’s speech was inspiring and his unswerving admiration of Jews and Israel quite moving. His sincerity, at a time when many UK Jews are feeling less safe than ever before, is hugely appreciated and cannot be underestimated. You can read the full speech here, David Cameron’s Chanukah 2014 message

Finally, when it comes to dedication, there are none more dedicated than those at the UN. Their dedication to undermining world politics, congratulating the unworthy and generally making a mockery of justice is unparalleled. Whisper it quietly in the UN’s corridors of power, but they “don’t seem to like us Jews or Israel much” tends to be the general feeling. Whilst that might sound somewhat cynical, the amazing work of UNWatch published (via Buzzfeed if you’d like to read, here UNWatch Top 10 Worst UN decisions) some amazing acts of ignorance by the first global organisation in 2014. Amongst its most stunning proclamations:

That’s just the numbers 10 and 9. Even the UNRWA handing back weapons to the terrorists of Gaza didn’t make No.1 on the “mis-hit parade”. No, No 1 in the Top of the Flops was this:

UN adopts 20 Resolutions on Israel versus 4 on the Rest of the World combined. Despite the gross and systematic abuses committed by China, Cuba, Egypt, Pakistan, Russia, Saudi Arabia, Sri Lanka, Sudan, Turkey, Venezuela, Zimbabwe, Rwanda etc., the only other countries who received condemnations were Iran, North Korea, Ukraine and Syria (and only one for each of them). Is Israel really 5 times as bad as the rest of the world put together? Well seems like the UN think so. 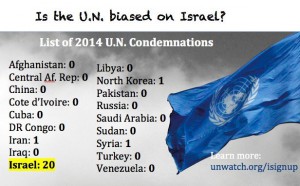 At the UN, Christmas is a time for giving, and the UN has certainly given more generously than ever before to the State of Israel. Unfortunately the receiving has not been greeted with the same enthusiasm as the giving.