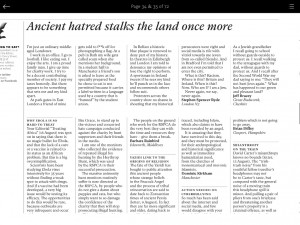 The First appearance of the Ordinary Londoner

I had two choices for this page, the Ordinary Londoner or Just1Voice.

The Ordinary Londoner came out of a Letter I wrote to the Independent about Anti Semitism.  Without knowing it, that letter was to go viral and within a couple of days was read by tens of thousands of people from all over the world.  It contained the phrase “as an Ordinary Londoner” and it kind of stuck.

What that did to me was push me into a journey.  I had previously written a few things for my work on technical subject matters and also started to support (in a modest way) campaigns around anti Semitism and commentaries on matters such as political bias, media bias, the rising tide of anti Israel narratives and anti-Semitism that goes unchecked and becomes the norm.  People seemed to have a clean conscience calling out Jew hatred, assuming that Jews deserve this, that Israel should operate on some higher morality than the rest of the world and is made to look like a terror state whilst being terrorised by others around them.  I tired of the UN, the British media, Europe and others supporting those that would not only see Israel vanquished, but also Jews disappear as if they were insidious and annoying wasps who deserved to be swatted.

Finally I tired of the social media hatred.  I became bemused by the level of hatred that could be spewed out on Facebook, Twitter, YouTube and so on.  One time friends would have no issue with calling for Israel to be obliterated and calling Jews Nazis, but also I would read hatred about Muslims or the left or the right.

So today, rather than shake my head in disgust at politicians and their betrayal of decency, shout at the TV for their open bias, moan at the continual narratives of anti-Semitism rolled out by so called “intellectuals” and share the upset with my family of dealing with personal attacks on us because of faith, background or culture, I write.  I write a lot.

I write to Parliament, the UN, the press, the unions, the establishment, the extremist, the organised bodies and institutions.  And amazingly they listen.  And amazingly I have grown a network.  And amazingly I have made wonderful friends and met inspirational people who otherwise I would not have known.  I have been fortunate in the support people have given me (special thanks to my incredible “Facebook Publisher” who continues to republish tirelessly).

BProud2b is a simple idea which will take time elsewhere.  But BProud2b is the idea of being proud to Jewish and proud to be British and hopefully that will be a future project that will make a difference to communities.

Blogging is now part of my journey.  As well as writing the blog for myself and my network, I am fortunate enough to be able to share it with a wider audience  through online news at The Jerusalem Post and The Times of Israel.  I am extremely grateful to one wonderful lady who put me forward to do that, and also for the support of my fabulous wife who gives me continued motivation and guidance.