​This week is marked by Holocaust Memorial Day.  We remember grievous moments of humanity at its worst.  At the forefront, the slaughter of 6 million Jews in World War 2 which must never be forgotten.

The film Denial, the trailer which is attached, tells the story of one man who tried to alter history and deny this evil.

You would think that the revulsion of Holocaust denial and antisemitism portrayed in this film would be too disgusting, too awful to reappear.  But when I went to the comments on this trailer I read with horror the thousands of comments rife with Holocaust denial, bigotry, antisemitic tropes and full on racism.  Just one commentary dialogue below, but I could have picked thousands of other examples:

idloso Jews lie about everything. They are the Devil.

At the weekend posters of this film in London were defaced with antisemitic graffiti.
But if you think that the film has simply attracted antisemitic behaviour because of its subject matter, unfortunately that is not so. 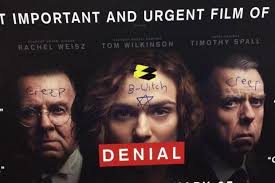 Last night a Jewish university lecturer was victim of awful antisemitic attack on his own campus.  At the weekend there were several antisemitic attacks on Jewish homes and communities here in London.  Last week in UK there were multiple bomb threats at Jewish schools (incidentally in the US last week there were around 20 similar threats).  Daily there are anti-Israel meetings in universities and in the community where antisemitism is the common language and the language of choice. 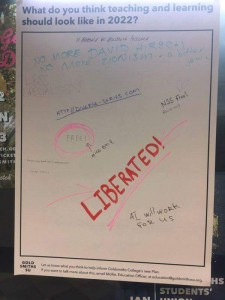 What do you think antisemitism looks like at Goldsmith’s College…..

This is not new, but it is overwhelming.

MPs, Councillors and Political activists, once suspended,  have now been welcomed back into their political folds having used social media and their positions of influence to spread vitriolic hate against Jews.  Yesterday, an Oxford University Labour Movement was reprieved from punishment for a vicious attack on Jewish students.  This, despite the report (produced by Baroness Royall) into the incidents making very clear that antisemitism had been prevalent in the group.

David Irving, the Holocaust denier (and the subject of the previously mentioned film) is once again touring to adoring crowds demeaning the memory of the victims of the Holocaust and spreading vile racism.  David Icke is selling out a tour in major venues in the UK sharing Jewish conspiracy theories the like of which were last trotted out to large audiences in the 1930s by fascists.

In the last few days the media has reacted with hyperbole regarding a “Jewish lobby”.  A multi million pound six month long undercover sting by Al Jazeera found, shock and horror that: 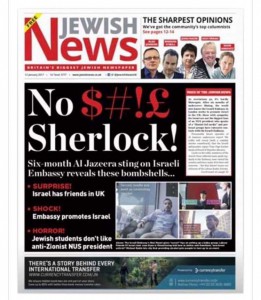 A Jewish newspaper puts the Al Jazeera sting into perspective…. No sh*t Sherlock!

Yet that did not stop the Leader of the Opposition calling for an inquiry and at least one national newspaper screaming front page headlines.
The international community has bolstered Jew hate by, amongst other acts, condemning Jews for their inalienable rights to a homeland and its defence.  So much so that the most precious and holiest site in Judaism, the Kotel (The Western Wall) in Jerusalem has been deemed by the UN a site of Arab ownership and Islamic control.  Not even referred to by its Hebrew name, but an Arabic one.  And at that same UN, more hyper critical resolutions against the Jewish State have been made than against the rest of the World combined.  Yes, more than against Syria, North Korea, Iraq, Iran, Saudi, Venezuela, Yemen, Sudan, DR Congo, Russia, Turkey and the rest of the World combined.

These are contemporary samples of life in the UK as a Jew and the exhausting hatred that surrounds and addresses us.  I could quote countless other examples that have occurred in the last few days.   Most of my Jewish friends are acutely aware of this and perhaps a few of my non Jewish friends are.

I am not usually one for sharing my personal opinions, but in this case I am even less comfortable ignoring and hiding them from view.

Be under no illusion, hating and abusing Jews is becoming the norm and many of us can see the writing on the wall…. both literally and figuratively.