Those pesky Jews…… sorry Israelis.  They know how to make antisemitism work for them.

Over the next few days you will see various posts and feedback from a meeting held in Birkbeck College, London. 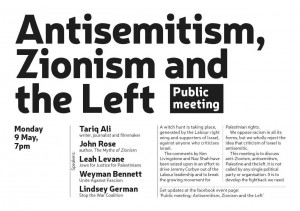 The last time I was at Birkbeck was also a fascinating event, looking at a media product to teach students about the suffering of Palestinians and the evils of the Zionist project.  At that meeting I watched a PR lady tell the audience that Israel and the Jewish super wealthy bought politicians and I could buy a copy of a book by the leader of Hamas which promoted the terror activities of the terror group:

But this meeting was somewhat more vibrant and topical.  This meeting featured the most ardent of the Corbyn supporting Left.   They were there to discuss, in theory, anti Zionism, antisemitism, Palestine and the Left.  But mainly, they were to join in a chorus of hatred against Israel and provide all the narrative that one would ever need to prove that antisemitism

a) doesn’t mean you can’t hate Israel to oblivion,

b) doesn’t exist on the Left and

Amongst the motley crew of decent Left leaning statesmen (or should that be states-people) were representatives of Jews for Justice for Palestinians, Stop the War, Unite against Fascism, veterans of the Left and the culture angle from Tariq Ali.

Others, such as David Collier, Jonathan Hoffman and Richard Millett, will write excellent political analysis of the events of the evening and bare witness to the hate. 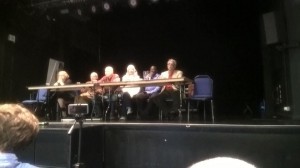 So I will tell you just one simple message that tonight’s panel want you to know:

THERE IS NO SUCH THING AS ANTISEMITISM ON THE LEFT, JUST A ZIONIST CREATED MYTH WHICH IS USED TO OBFUSCATE THE CRIMES OF ISRAEL AND DEMONISE THE LEFT

Chief amongst the victims of this malevolent antisemitic myth, Jeremy Corbyn.  If it wasn’t for those pesky scheming Zionists (insert Jews and Israelis) Jeremy would be sailing through to power with an overwhelming majority.  If it wasn’t for those conniving zio lobbyists, Jews wouldn’t have such a hard time with real bigotry.  If it wasn’t for those manipulating Jewish politicos (like Mark Regev) controlling the media airwaves there wouldn’t be a Jew hater in site and if wasn’t for those murdering Israelis killing Palestinian children with gay abandon, Jews the world over would be safe and loved by every decent human being.  And of course, if Israel would just let all those 6, 7, no, 8 million Palestinian refugees from around the world back in to Palestine and let the resulting Arab majority decide what should become of the Israel, then there would be World Peace.  Of course, as we were told by Tariq Ali, no less, the Muslims have a great history of caring for and working with the Jews (albeit he conveniently forgot the near million that were forcibly exiled from all parts of the Arab world around the same time as the State of Israel was created).

As those of you who follow me know, I’ve been writing to Jeremy Corbyn and some of his colleagues for the last 9 months or so on an almost daily basis about his “antisemitism problems”.  His personal relationship with it, his allies, parliamentarians and councillors in the Labour Party who freely bandy antisemitic tropes and his loyal membership who preach antisemitism without a care for who hears it and what they think.

Birkbeck College tonight was the inner sanctum of Israel-, Zionist- and Jew-hatred.  There debating what antisemitism is, were the foot soldiers of the new antisemitism.

As a tidy dénouement to tonight’s episode, I recalled being sold that Hamas book.  I wondered whether I could buy a copy of this terror manual on line.  Sure enough Amazon would not sell such a hate ridden and vile book, but the Amazon marketplace has everything for sale.  There I found a copy for sale from a source close to the heart of Jeremy himself.  Corbyn, had, a few years previously vehemently defended a leading member of the Anglican clergy who had made mendacious antisemitic statements.  The church suspended him, just like the Labour party now does with its bigots.  The clergyman and the book seller were one and the same, Stephen Sizer.  Thus rounding off neatly a night of Jew hate.