There is much confusion and concern regarding the ongoing scandal of antisemitism in the Labour Party.  We have watched in disbelief as Labour Party members have shown their darker side with outrageous bigotry directed at Jews.  But have we really understood what is going on?

I watched an interview on BBC with now suspended Labour Party councillor from Blackburn, Shah Hussain.  He was suspended for the following tweet:

But maybe, just maybe Shah’s tweet to an Israeli footballer was nothing more than a mild jibe at a Jew and Israeli footballer, which was completely understandable given Shah’s outrage at the fact that he considered all Israelis child killing Nazis (except perhaps the 20% who aren’t Jewish).

‘You are a complete and utter plonker, you and your country doing the same thing that Hitler did to ur race in WW2’

Look beyond the outrageous bigotry that appears to be inherent in that tweet and all may become clear. Shah has revealed that is all

“a witch hunt and all because I am a Muslim”.

How foolish this whole “Labour antisemitism” thing is. Simple, it is all just a cover up. Shah Hussain has revealed that the Labour Party is getting away with outrageous Islamophobia by making out that Shah and many like him are antisemites.  This is a perfect slur.

How did we miss that….. A Jewish and Labour conspiracy with the Islamophobe in chief, Jeremy Corbyn, masterminding the whole conspiracy.  He just wants to make these poor Muslim politicians suffer by calling out perfectly innocent bigotry as racism!

Yet Jeremy’s real friends are rallying around him. They know how to be real Jew haters. Not some “plastic bigot” like these poor political victims.  JC’s friends, well, I say friends…. 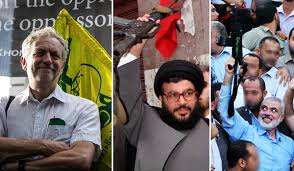 A spokesman for Hamas has now hailed Mr Corbyn for his refusal to condemn the terror group. Taher Al-Nunu said Mr Corbyn’s willingness to engage with it was a ‘painful hit that the Zionist enemy received’. ‘We welcome the declaration of the Labour Chairman and see his engagement as a very important statement.

But wait until Hamas find out what an Islamophobe he has been to the good and the great of his own party suspending Hamas and Hezbollah supporters up and down the land.  Surely then Hamas and Hezbollah will come rolling in to the UK in defence of the embattled “innocent 50” Labour politicians, councillors and party workers.

Maybe this is the predicted coup come from the friends of Jeremy?  We’ll know shortly.