In this case the town was Finchley and the circus was that venerable BBC TV political panel debate programme, Question Time. Thursday nights in the Bond-Ryde household usually reverberate to the sound of my wife and I discussing the on screen diplomacy or lack of it by various political VIPs. But our house remained quiet this Thursday as, rather than debating with the TV we got to participate first hand in the audience. 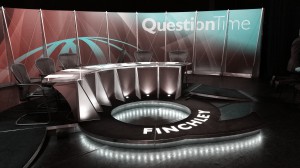 Before I go any further I should say that whilst we can be particularly vocal in our debates and reactions when behind our own front door, when we are in a public space we behave with the dignity and respect as decent people do. And this extends to a debate on the BBC. Even if the auditorium and panel contains individuals who I would not welcome into my home, let alone my sphere of conversation.

So the good folk of Finchley turned out on a freezing cold evening to “chew the political fat” with some of Britain’s best known political faces. And as we supped on the pre-show coffees and munched the pre-show biscuits, the 150 or so men and women discussed what we would ask, what did we think would be asked and how the panel would react. The real reason for such excited discussion was, of course, the make up of the panel.

Now why, do you suppose the BBC would put a show on in the middle of the largest Jewish constituency in the UK with a politician who, well, doesn’t have much in the way of anything nice to say about Jews and Israel?

At 8:30, the circus commenced. It started quite pleasantly, despite the freezing conditions due to the broken heating in the theatre. In fact it was no surprise that the debate wasn’t heated, it was sub zero!

The first question was about business and the relationships of political parties to the entrepreneurial society. Plenty of hot air from the audience and panel started to raise the temperature into the positive Celsius. The next question was about education and the reduction in funding. It got us warmed a little more. Everyone knows that education is at the heart of the Jewish community so it certainly got the temperature rising.

Then, the moment the broadcasters had been planning for…. the question that we all knew would turn up the climate to tropic heat. A young man, a cheeky smile starting to appear said “What does the panel think of the rise in antisemitism”. But, he added (unscripted to the question agreed) “and is one of the panelists in particular responsible for inflaming this issue”. So it was that the mob started to rule the debate and the show really began.

Firstly, Jonathan Friedland was allowed to respond. Now Jonathan being Jewish spoke eloquently enough. Although he made one large faux pas in referring to the summer’s events in the Middle East as the “conflict in Gaza”. Jonathan, do you not realise that the conflict requires two to tango. It was the conflict between “Israel and Gaza”. This shocking error showed Jonathan’s newspaper bias. The Guardian, for whom he writes, continually appears to side with the Palestinian cause and is often at the forefront of criticism of Israel.

Nonetheless, moving on, Jonathan showed a clear demonstration of the concerns of Jews in the UK and Europe with respect to the rising tide of hatred that Jews are having to endure and the lack of traction in dealing with this until very recently (when many feel it is already too late). Jonathan having made his points, the ring master, Jonathan Dimbleby, turned to George Galloway and asked for his thoughts. Thus debate turned to debacle.

Probably about a dozen or so people in the audience began to bate George Galloway and the whole debate took on a ridiculous Jerry Springer style. Sadly the opportunity to do some good for our community, to raise issues that would have shocked the viewers and to to see George Galloway entrap himself in his own hatred was squandered. No one exposed him for his racist remark about the make up of the audience. There was no unmasking his inability to differentiate between zionists and Jews (despite tying himself in knots trying to deal with that). What we got instead was a bunch of loud mouthed individuals yelling uncontrollably (in the name of our Jewish community). And to my mind doing the credibilty of Jews in the UK no good and, sadly making George Galloway look, yet again, like the victim!

So here’s my letter to George.

I was in the audience at the Question Time in Finchley last night.

Whilst I may not be your biggest fan, may I say how engaging you were compared to the other panellists. You were entertaining and made for compulsive “TV viewing”.

Like you, I was immensely disappointed to experience the “rowdy” and “unruly” behaviour of a small but vociferous element of the audience (I think it was no more than about 10 people, but they hijacked the debate). What a pity, as it really meant that a full and challenging discourse could not be held.

I am copying the Production Company, mentorn.tv, who should be able to forward to Mr Dimbleby (as chairman). I was disappointed that, as the chairman, he did not take more care to ensure that the debate was managed properly. Disappointingly it gave the “loud mouths” the floor because they shouted. In debates that I have managed they would have lost the right to speak. Why didn’t Mr Dimbleby simply say “if you shout, you’ll be ejected or loose the right to ask a question”. What do you think? Do you think Mr. Dimbleby was setting you up? Setting us all up, maybe?

There were so many questions regarding antisemitism and so much awareness that could have been raised for the better and I’m sure that you would, had a more dignified air of debate existed, provided us with clearer perspective of your views. Personally, I would have loved to ask the following:
■ Why the BBC is not prosecuting one of its own for publicy broadcasting antisemetic views?
■ Why the worst attacks on Jews and other civilians seem to be prevalent from extemist Islamic sources (not from a provocation point of view, but simple statistics). This is a hard question, I know, but it was an elephant in the room, although one person did mention it? But it would have given us a chance to hear your views on Islamic extremism (again, I expect you have some very profound insights).
■ Why politicians (and honestly, NOT reference to yourself, but the likes of Jenny Tonge) are able to get away with clearly antisemitic tropes with impunity?
■ And finally, what can we all do to make Britain a safer place for Jews?

It is highly unlikely I’ll get a response? George doesn’t usually debate with Zionists.

Is he some sort of force of evil? I don’t think so. Much more the pantomime villain and circus clown.
But if the circus comes to town again, clowns and all, I don’t think I’ll be running off with it. I think I’ll stay at home and watch it on the little screen and go back to shouting at the telly with Mrs Bond-Ryde and a cup of tea. 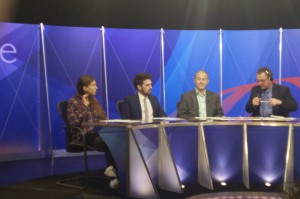 At least I got to be a panellist